Religion and views of life 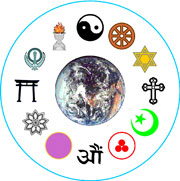 Religion or any view of life is a basic need of every human being. Of course the content is spiritual, but in the division of labour we are consumers where we ask a priest, an imam or a guru to help us to find our way “up”.

The allround basis for our quality of life is of course our motivation! WHY are we living now and here? What’s the meaning of life itself? Where do we come from and where and how will we go on? If we don’t try to find the answers on those questions in one way or another everything else will always be a cycle of question after question. So we should have to think about religion as the first “daily need” very thoroughly before thinking about all the other needs!

A fast-forward answer is that there has to be reincarnation after reincarnation as an eternal ongoing life not as a cycle but as a developing process to ever higher degrees of being. Otherwise life itself should only be a time-filling holiday or a struggle-for-life which always ends in a bodybag and a coffin or some other way of vanishing from this playing ground. Although everybody has to think about the meaning of life him/herself to get the answers, we could imagine that the human being is on its way to become a free and self creative copy, clone, child or descendant of its Creator and has now just become mature in this 21st century! Then and only then the human being and its role as consumer becomes as clear and understandable as possible!

All religions around the world are speaking about a spiritual world which is as real as the material world. Since the 20st century more and more people are talking about experiences by meditation, praying, or even drugs, almost-dead situations in crashes, hospitals or during climbing in the alps. Reinhold Messner the greatest climber of this century who reached all the 8000-summits alone and without oxygen said on German tv in 2005: “Yes – I experienced that spiritual world where we came from and where we go to, even three times when falling during my mountaineering expeditions – for me that spiritual world is a reality – what’s your next question?”

Also more and more scientists in nucleair research after Fridjof Capra (see his bestselling books Tao of Physics and The Turning Point) became aware of the treshold between light and matter. Where the wisdom of the Kaballa centuries ago already said that when light comes via an inward spiral into a circular move – it becomes matter – as we can see in the structure of every atom. In this 21st century these things will get clearer and clearer and give way to understand the world and the cosmos in space and time as a composition instead of the big bang theory of a chaotic warehouse of probabilities ….. The development of mankind becomes more and more visible as a more-than-one lifelong learning proces.

When we look more intensely to all religions in a time-line everything becomes more and more clear being a developing process in the history of mankind. Then we can recognise religions as different directions of believing, but also as a coherent system of “schools” in educating the human being in a systematic order towards a self-creative individual-citizen-consumer.

Therefore we can stop writing our text here on this page in the same way that all information from the Cheops Pyramid, Nostradamus and others stop around this time. All religions are from now on more and more working towards the future, in oecumene, meeting of cultures, and renewing religion in itself as a developing process of working together with the spiritual world in a mature way! Especially in the opening of all esoteric schools we can find the answers that all religions are related to each other. The 21st century is only the beginning of Religion 2.0 as to say it in modern words! A (more than one) lifelong learning process!

Religions in a time-line

In fact all family-trees go back to Adam and Eve and our Creator (or the Big Bang). Especially since the 9/11 experience more and more of us worldwide feel that they are part of one big family in the global “village”. Plus realizing that we have to manage a better way of living together between us all and with nature as a whole. And with the cosmos and the spiritual worlds!

So we have to continue that lifelong learning proces not only to find ourself but also to understand each other. The world of economy can give us the best opportunities to learn, because especially as producers and consumers! we ARE interrelated!